Revolution in The Weardale 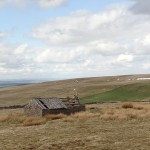 Hello, In 1818 times were hard in Weardale as the price for lead was low in the markets and so the wages the lead miners were receiving for their hard and dangerous work was not enough for them or their families to survive on. Around them they could see plentiful game, such as the moorhens and grouses, so to support their families they took to fells and hunted for their food.

Unfortunately the hunting rights to this land, was owned by the Prince Bishop of Durham who, not taking into account the hardship the lead miners were experiencing decided to take action against what he considered poaching and therefore stealing from his land. So, in 1818, on December 7th, Bishop Shute Barrington sent an army of men, including land stewards, bailiffs and gamekeepers, to Stanhope to arrest the ring leaders and imprison them in a local inn.

The local lead miners were angered by this and collected outside the inn, demanding the release of the men. This resulted in a ‘battle’ between the Bishop’s men and the locals with the Bishop’s men being heavily defeated and much bloodshed.

This event has become known as ‘The Battle of Stanhope’ and commemorated in a folk ballad called ‘The Bonny Moor Hen’. This folk ballad has become legendary within the area, demonstrating the strength of the local miners and farmers and their independence, and was often sung at the local Stanhope fairs. Some of the verses can be seen below…

“You brave lads of Weardale, I pray lend an ear
The account of a battle you quickly shall here,
That was fought by the miners, so well you may ken
By claiming a right to the bonny moor hen.

Oh this bonny moor hen, as it plainly appears,
She belonged to their fathers some hundreds of years;
But the miners of Weardale are all valiant men,
They will fight till they die for their bonny moor hen.

Oh the miners in Weardale, they are bred to the game
, They level their pieces and make sure of their aim;
When the shot it goes off – Oh, the powder doth sing,
They are sure to take off, a leg or a wing

Now, the times being hard and provisons being dear,
The miners were starving almost we do hear;
They had nought to depend on, so well you may ken,
But to make what they could of their bonny moor hen.

There’s the fat man of Auckland and Durham the same
Lay claim to the moors and likewise the game
They send word to the miners they would have them to ken
They would stop them from shooting the bonny moor hen.

Of these words they were carried to Weardale with speed
Which made the poor miners hang down their heeds
But then sent an answer they would have them to ken
They would fight till they died for their bonny moor hen.

When this answer it came to the gentlemen’s ears,
An army was risen, it quickly appears;

Land stewards, bum bailiffs, and game-keepers too,
Were all ordered to Weardale to fight their way through.

‘The Bonny Moorhen, Or, the Battle of Stanhope: a Sketch of An Encounter Between the Weardale Poachers and the Gamekeepers : With Ballad’ by William Morely Egglestone, first published in 1880 by StrongWords and reprinted in 1979. Unfortunately these editions are difficult to come by but a very good and comprehensive depiction of the events can be found at – Drama in The Dale

I am a retired Chartered Accountant and live with my partner Mary in Rookhope. We walk and dance a lot and attend as many Highlights North productions as possible. I belong to the brilliant men's table tennis club in Edmundbyers and have a tree planting project in Rookhope.

This site uses Akismet to reduce spam. Learn how your comment data is processed.

WTW is a small, friendly walking group which meets on the 1st and 3rd Tuesdays of each month for walks in Weardale and its fringes..  Everyone is welcome on our walks, local residents and visitors to the dale alike.

The group’s walks will appeal to individuals who have a reasonable level of fitness and walking ability as walks will be 4-7 miles long with ascents up to 1,000 feet and may include steep climbs and descents, rough, uneven, boggy and rocky terrain and the fording of streams etc.  Please check the detailed description of all walks on the website to assess whether they are within your capabilities before joining any walk.

As walks may be cancelled or rescheduled for later in the same week in the event of bad weather consult the www.weardale.uk website from 8am on the morning of the walk before travelling.

Everyone taking part in the group’s walks does so at their own risk.